The Wakhan Valley is a common favorite destination for travelers who visit Tajikistan. With ancient caravanserais and fortresses, unique language and culture, and glimpses into Afghanistan and even into Pakistan’s Hindu Kush, it’s easy to see why the Wakhan is usually a fan favorite.

Easily reached from Khorog or Murghab, the Wakhan Valley Road makes an unforgettable diversion from the Pamir Highway.

Only three hours by car south of Khorog, Ishkashim is your first introduction to the Wakhan for those travelers making the journey in from Dushanbe. Outside of town, you’ll find a caravanserai that dates back to the 6th century, the ancient Ryn Solar Calendar, and a shrine to Zanjiri Kaba.

About 15 kilometers beyond Ishkashim, arrive at the village of Namadgut whose star attraction is the 2nd-century Kushan era Khaakha Fortress. The fortress does sit right on the banks of the Panj River which forms the natural border between Tajikistan and Afghanistan so you can usually expect a military presence here. Khaakha is though to have been the leader of the Sia Posh tribe, originally hailing from Afghanistan’s Nuristan region.

Yamchun Fortress sits above the valley floor with stunning views across the Wakhan Valley to Peak Baba Tangi on the Afghan side. At the village of Tughoz a dirt road winds upwards bringing you to Yamchun and later to Bibi Fatima Hot Springs.

The fortress is thought to have been built by the Kushans, dating back to the 3rd century BC but most of what you do see today was constructed in the 12th century. Yamchun is largely in ruin but still a fantastic site.

Thought to have healing properties and to help increase fertility many Tajiks make a pilgrimage-like journey to Bibi Fatima to bathe in its warm waters. Located about 1 kilometer beyond Yamchun Fortress there are several guesthouses scattered around the main building housing the spring.

Bathing in the hot spring is to be done in the nude so you will find that the hot springs do have alternating men’s and women’s hours.

Thought to have been built atop a Zoroastrian fire temple, Vrang Stupa somewhat resembles a small step pyramid. It’s believed that the stupa was constructed in the 6th century and that the rock atop it features a footprint of Buddha.

Take a careful look at the arid cliffside near the stupa and notice the caves dotting the rock wall. These are thought to have been living quarter caves for Buddhist monks who came to Vrang. Beyond Vrang into the mountains, there is a difficult hike that goes up and over Vrang Pass to reach the Shokhdara Valley to the north.

A beloved overnight hike in the Wakhan is that which goes to Pik Engles Meadows. Pik Engles is a unique shaped peak in the Shokhdara Range and isn’t visible from the Wakhan unless you take this trek which turns up a valley from the village of Langar.

Above the village of Langar, the first stop in the Wakhan for those coming from Mughab and last stop for those arriving from Dushanbe, are over 6,000 petroglyphs that can be found strewn all over rocks and boulders as you meader up from the village and toward the Pik Engles Meadows. 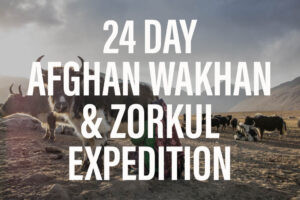