If it’s funky canyons, rolling hills, cotton fields, and strange landscapes that you’re looking for Tajikistan’s southern region of Khatlon is where to go. Tajikistan is most famous for its high mountains so it should come as no surprise Southern Tajikistan is oft forgotten. That all said, there are plenty of things to do and see whether it cultural or natural here in Khatlon.

Khatlon and South Tajikistan are best visited in the late fall, winter, spring, and early summer as the region is unbearably hot mid-summer to mid-fall.

Recently renamed back to Bokhtar, Qurgonteppa is Tajiksitan’s third-largest city. The city was reduced nearly to nothing during the civil war, so most of everything you’ll see here is a bit newer.

The main attraction to visiting Bokhtar is to get out to the site of the 8th-century Buddhist monastery of Ajina Tepe, located only 12 kilometers from the city. Bokhtar also serves as a great jumping-off point for those that want to go wildlife-sighting in Tigrovaya Balkka Nature Reserve.

Right on the Afghan border in Tajikistan’s extreme southwest is the city of Shahrtuz. The main attraction to making the journey all the way down here are the sites that sit outside the city. Chehelchor Chashma being one of the most common, whose name means 44 springs. Chehelchor Chashma is a famous pilgrimage site being an oasis sat in a fairly desert-like setting.

Another famous site outside of Shahrtuz is Takht e Sangin, otherwise known as the Temple of the Oxus. Takht i Sangin is among the oldest archeological sites in Tajikistan. Despite being an important Achaemenid era citadel and temple, you’ll be hard-pressed to find another tourist in sight here.

Outside the city of Kulon sits the medieval fortress of Hulbuk. The building itself is pretty grandiose, though it is mostly a more recent reconstruction that commemorates Kulob’s 2700th anniversary.

Sary Khosar is more common with local tourists than with foreign ones but for those looking to get far off the beaten path in Tajikistan, this area is a great option. The valley boasts unusual rock formations, lovely villages, an ancient chinor tree, and even a waterfall.

Not too far away and much like Sary Khosar, Childukhtaron is another famous vacation spot for local Tajik tourists. Here you will find the ‘Forty Girls’ which is what Childukhtaron translates out to.

Yakhsu Valley is a place little-known, even among local Tajiks. The valley extends from Tavildara near the Rasht Valley in the north all the way down toward Khovaling near Sary Khosar. Similarly, the main attraction here is the strange rock formations along the valley. 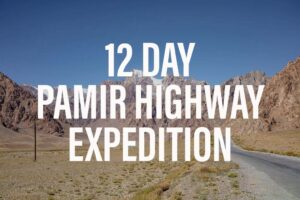