Dushanbe is the capital of and largest city in Tajikistan. Nothing more than a dusty village named after its popular ‘Monday Bazaar’. Dushanbe gained notability in 1925 when it was named the capital of the Soviet Union’s Tajik ASSR. By 1929 Dushanbe would be renamed Stalinabad and remain under that name until the nation gained independence in 1991.

Today, Dushanbe feels like a leafy oasis- a great place to relax between mountain adventures in Tajikistan. The city is undergoing a transformation these days, as modern buildings replace Soviet-era relics. That said, Dushanbe offers plenty enough to do to keep most travelers entertained for a day or two with highlights such as Rudaki Park, the Somoni Statue, Komsomol Lake, the world’s second-tallest flagpole, Kokhi Navruz, Mevlana Yakub Charki Mosque, and nearby Hisor Fortress.

Dushanbe offers many creature comforts making it a good start or finish to any trip in Tajikistan with an array of accommodation options, hip restaurants serving up international cuisine, and a fun albeit small nightlife scene.

Just next to Rudaki Park, you will find the impossible to miss gleaming gold Ismoil Somoni Statue. Ismoil Somoni was the 10th century founder of the Samanid Dynasty that ruled over Transoxiana- a region that encompassed much of Central Asia.

Finally, the Gurminj Museum is usually a crowd favorite with its small room full of about 50 traditional musical instruments from Tajikistan and greater Central Asia.

One of Dushanbe’s claims to fame was having the world’s tallest flagpole. Sadly, a flagpole in Jeddah was constructed knocking Dushanbe’s Bayrak into second place. Even with Bayrak’s fall from the top of the list, it’s still pretty impressive, and sitting on part of the artificial Komsomol Lake makes it a perfect stop as you tour the city

Mevlana Yakub Charki is a Hanafi mosque and madrasa located off of Rudaki Avenue, tucked into a neighbood behind some new high-rise buildings. Only built in the late 1990s, the mosque features a unique tiling style that appears influenced by other Soviet-era works in the city. The mosque is open to non-Muslim travelers for visits outside of prayer times.

Hisor Fortresses’ history stretches back over 2,000 years to a time when the site functioned as the capital of a khanate all its own until it eventually was swallowed up by the larger Khanate of Bukhara. The fortress has been largely rebuilt in recent times. Exploring as a side trip from Dushanbe as it’s a short 25 kilometer drive away is a great way to spend an afternoon.

One of the more bizarre buildings on this list is the giant melon-shaped Chaikhana Kharbuza. Longtime president Emomli Rahmon in 2015 for the city of Hisor’s 3,000 year anniversary.

Why melon-shaped you ask? Because melons are widely grown across and consumed in Tajikistan. 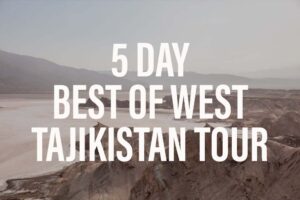 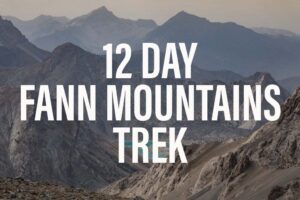